I know I have been posting FHM related blogs later than what is expected from eager bloggers (yes, I just called me a blogger). But this month’s post went over the top when it comes to the lateness of a review. Well, let’s just say that people around our household have been very, very busy, hence the lack of time for the internet.

Forgive me, dear readers. I know there are 10,000+ page views on my blog and I just gave myself an obligation to post some more (I just really need to say that my blog is 10k views strong)

Elephants are amazing creatures. Other than their notable physical attributes and humongous appearance, there are many special things that make today’s largest living earth mammal amazing, pathetic and an object of envy all at the same time.

…because the bones in an elephant’s foot are too closely packed together hence the lack of flexibility and spring mechanism to enable them to enjoy skipping ropes and imitate Super Mario.

Scientific researches proved that ‘elephants can certainly build up a memory over the years and hold on to it’. It helps that they have the most well-structured brains amongst mammals of all types.

FACT #3: Elephants are well-loved in Thailand.

Not only because they are very useful as assistants to manual laborers, but also because they are important religious icons in Buddhism. According to legend, Buddha’s mother dreamt of a white elephant prior to Buddha’s conception. Ganesh is an elephant, too.

So the elephant sharing FHM September 2011 cover with Lovi Poe is very lucky and deserving. First, he will never EVER forget that a scantily clad Filipina actress once caressed him on all the right places. Then, of course, a god-like creature (and a trained actor) like this elephant deserves an equally god-like muse to join him in his FHM debut (or the other way around). Too bad he can’t jump and rejoice because if I were him, I certainly would. 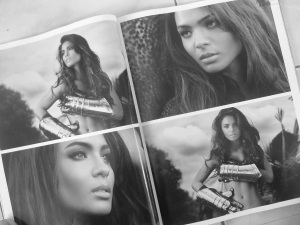 Lovi Poe’s pictorial looks very nice. One look at the cover and you would think that it is not FHM you are seeing. I have to say, best cover of 2011 so far. I have to disagree with others who say that the photos were too high fashion. Yes, it looks classy but not too fashion-y as to not qualify as a men’s magazine material.

Lensman Mark Nicdao also did the same with Solenn’s FHM debut earlier this year, and it looked really nice. Kudos to FHM for trying to up the ante and venturing into more artsy and risqué concepts. Lovi looked better here compared to her Rogue Magazine photos last July. But the last two photos of Lovi didn’t look coherent with the others because of the treatment. But everything looks fine in general 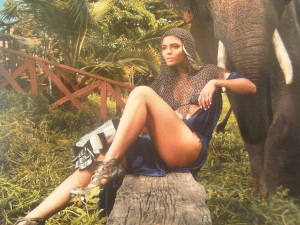 Pam Quinones did well in styling Lovi. The armor and the black dress looked good on Lovi. 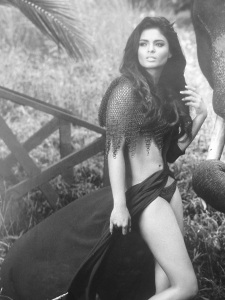 Lovi Poe is very deserving to be on FHM. I mean, she has shown us in more ways than one that she has a rockin’ bod and the natural appeal to back it up. Having a buzzed about pictorial is just a bonus and not really important.

FEATURED GIRLS
The line-up of this month’s girls (and their photographs) is not impressive. DJ Sarah Robertson did it with disco balls; Jenny Xen in a pool (which looked good) and a bowtie, red undies and nothing more in another layout. Jen Bustillos… meh pictures.

The girls who caught my fancy were September GF Arra Pascual

I hope they would return with more photos and hotter concepts.

Also featured in this issue is a 5-page spread for the remaining 6 Premiere Vixens. Their photos are electrifying. Not only do we see their goodies, everybody registered striking faces in all photographs. 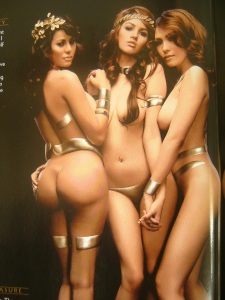 (Bridget Suarez and her cheeky pals…. with Dorina Groh and Ayumi Sogawa)

I haven’t read any of the articles but I know that there’s one about painful medical procedures. Ah, the mental images we get. AT least it has no graphic images compared to last month’s article on the art of torture.

I look forward to reading the article about REAL super Pinoys.

On the flipside of this issue is Derek Ramsay covering the yearly FHM Collections where they feature men in good-looking but theoretically hard to wear clothing. Of course they have stories to tell, too.

Overall, it’s not a bad issue. Not a knockout, but most definitely not the worst.

Oh, and people are guessing that Daiana Menezes of Eat Bulaga! would be next month’s cover. I hope she tags EB Babe Saida along. One Caucasian beauty, one Asian.

**Other images are from my digicam. Please lang.

Top of the Game

Composed. Formal. Deep.
Things you shouldn't expect from me. Can't touch this. No, really,